The overarching aim of our research program is to elucidate the cellular and molecular mechanisms that regulate the formation, function and maintenance of synaptic connections in the mammalian nervous system. We are particularly interested in the role of Wnt signalling in these processes.

We and others have demonstrated that this prominent pathway promotes the formation of excitatory synapses during postnatal development and is required for long-term potentiation in the adult hippocampus.  We also found that the Wnt cascade is crucial for synapse integrity in the adult brain as deficits in Wnt signalling cause synaptic plasticity defects, synapse degeneration and defects in memory. Notably, we discovered that Wnt signalling is compromised in Alzheimer’s disease (AD), contributing to synapse degeneration and memory impairment.

Understanding the molecular mechanisms that control the formation and maintenance of synapses during development and in the adult and aging brain is crucial for developing strategies for the treatment of neurodevelopmental disorders and neurodegenerative diseases where synapses are affected. 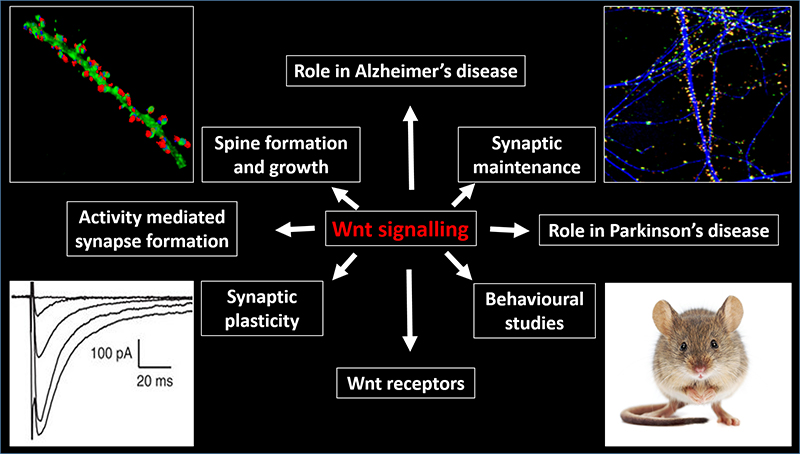 Our central aim now is to understand how Wnt ligands promote the assembly of synapses through their Frizzled (Fz) receptors. We found that neuronal activity, such as high frequency stimulation, promotes the surface localisation of Fz to the membrane and to synapses. Importantly, this neuronal activity-mediated process requires Wnt ligands (Sahores et al., Development 2010).

Currently, our focus is to understand the mechanisms that regulate Fz trafficking using live-imaging techniques that allow the visualisation of Frizzled-5 (Fz5) receptor in live neurons. We also use mutagenesis approaches to determine the domains of Fz5 required for trafficking as well as gain- and loss-of-function studies. For in vivo experiments, we use stereotactic injections of AAV viruses into the hippocampus that express wildtype and mutant Fz5 receptor, which exhibit defects in trafficking.

These studies will shed new light into the mechanisms that control the trafficking of these receptors on activity-mediated synapse formation.

Wnt signalling in the regulation of structural and functional plasticity

Together our studies demonstrate a role for Wnt signalling in synaptic plasticity. We are currently investigating the molecular mechanisms by which the Wnt7a-Fz7 signalosome activates plasticity pathways using a multidisciplinary approach.

Increasing evidence suggests that canonical Wnt signalling is compromised in AD. The first evidence came from the finding that Dickkopf-1 (Dkk1), an endogenous and specific secreted Wnt antagonist, is increased in the human AD brain and in the brain of AD mouse models. Dkk1 binds to the LRP6 co-receptor, blocking the interaction with Wnt ligands and therefore dampening the Wnt signalling cascade. Our studies showed that Dkk1 expression is increased in the presence of Amyloid-β oligomers (Aβo). Importantly, blockade or knockdown of Dkk1 protects synapses from Aβ toxicity (Purro et al, J.Neuroscience 2012). The second piece of evidence came from the discovery of a genetic link between variants of the LRP6 co-receptor and late-onset AD (LOAD). One of the variants, called LRP6Val-1062, carries a substitution from isoleucine to valine, conferring decreased Wnt signalling in cell lines. Further evidence came from the finding that the activity of GSK3β, a component of the Wnt canonical pathway, is elevated in the AD brain, resulting in decreased canonical Wnt signalling. Together these findings support the notion that deficiency in canonical Wnt signalling increases the risk of AD.

To mimic the effect of Aβ on Dkk1 levels, we generated an inducible transgenic mouse line that expresses Dkk1 under the tetracycline system. Induction of Dkk1 for two weeks in the adult brain leads to a significant loss of excitatory synapses, blockade of long-term potentiation (LTP) and enhanced long-term depression (LTD). Consistent with these data, these mice also exhibit defects in long-term memory (Marzo et al, 2016). Thus, endogenous Wnt signalling is required for the integrity of synapses and circuits in the adult hippocampus. Importantly, we found that reactivation of the Wnt pathway, after substantial synapse degeneration, results in the full recovery of synapse number, synaptic plasticity and memory (Marzo et al, 2016). Thus, modulation of the Wnt pathway could provide an effective approach for restoring neuronal connectivity at early stages of AD. 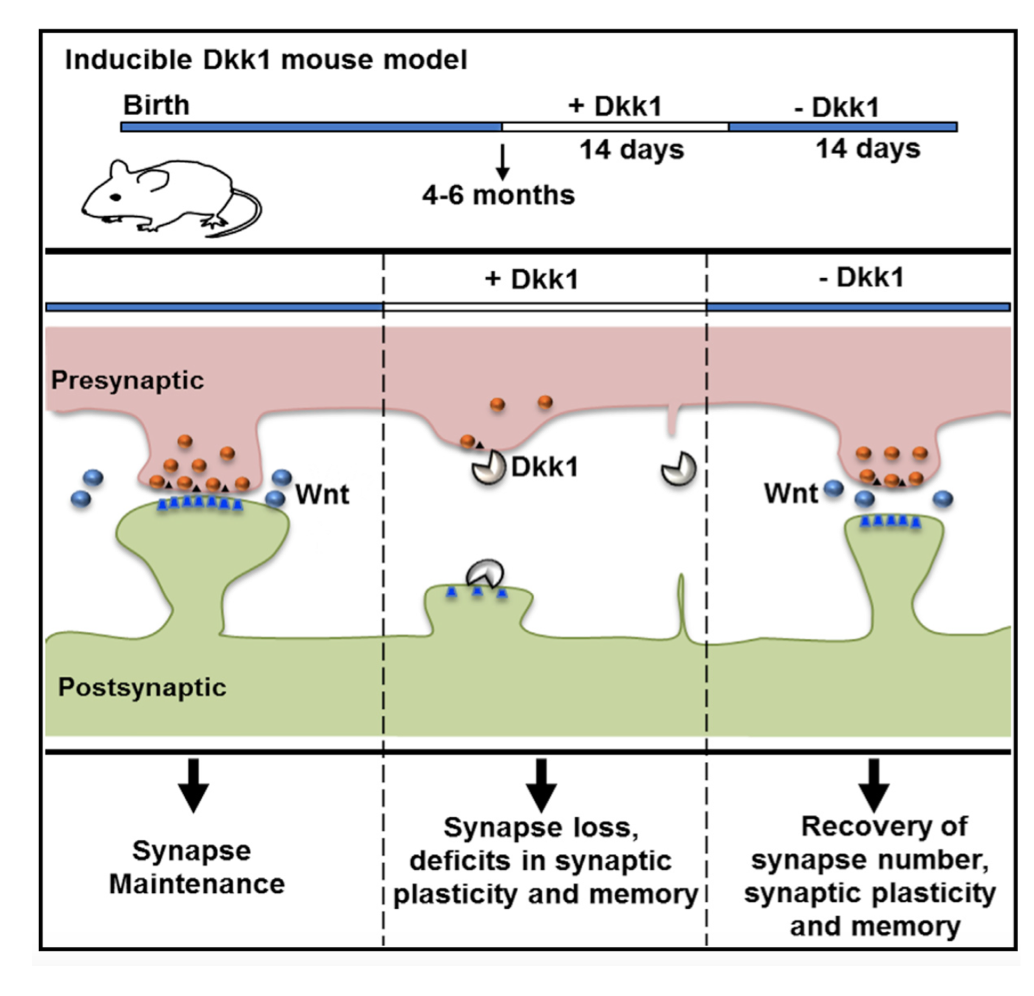 We are currently using optical brain slice clearing techniques such as SeeDB2S to visualise changes in dendritic spines and synapses during synapse degeneration in our Wnt deficient mice. We combine this technique with IMARIS 3D surface rendering to visualise the interaction of pre- and postsynaptic markers in apposition to dendritic spines. We are also using this approach to visualise the interaction and proximity of other cells such as glia with synapses.

More evidence for a link between Wnt singalling and AD comes from the finding of a variant of the Wnt co-receptor LRP6 that carries an amino-acid substitution in the extracellular domain of this receptor. We used CRISPR CAS9 genome editing to generate a novel knock-in mouse model to examine the impact of a mutation in LRP6 on synapse degeneration and AD pathogensis. We are currently analysing these mice for possible changes in synaptic connectivity.

We are also interested in Dkk3, another member of the Dkk protein family of Wnt antagonists. This secreted protein is present at amyloid-β plaques in the human brain.

Moreover, recent studies showed that Dkk3 levels are increased in the plasma and CSF of AD pateints and that its level is increased in several brain-affected areas and cortical synaptosomes from AD subjects. Using in vivo genetic approaches, we are studying the contribution of this Wnt antagonist to synaptic defects and memory impairment in an AD mouse model.

Our recent studies have shown that several Wnt components are deregulated in AD at the mRNA level. These findings led us to investigate if epigenetic mechanisms could contribute to this deregulation. Indeed, using human brain samples and established AD mouse models we showed that several Wnt receptors are deregulated through epigenetic mechanisms. We are currently investigating these epigenetic signatures using chromatin immuno-precipitation (ChIP) analyses, genetic and pharmacological approaches. Our aim is to restore the levels of Wnt components in AD.

In the hippocampus, induced Dkk1 expression triggers the loss of 40% of excitatory synapses but this effect is not progressive suggesting that some synapses are resilient to Dkk1. Interestingly, the same selective effect is observed with Aβ. Our ex-vivo acute-treatment with Dkk1 experiments using GFP-labelled dendrites show that Dkk1 induces the loss of certain synapses whereas nearby synapses in the same dendrite remain unaffected. These findings suggest that the susceptibility is at the synaptic level. We performed proteomic analyses of synaptosomes from Dkk1-induced mice. These studies revealed changes in key proteins that could contribute to either synapse degeneration and/or synapse resilience. We are currently investigating several candidate molecules for their possible role in synaptic changes. These studies will shed new light into how synapses become resilient to synapto-toxic molecules and to develop treatments to protect synapses in neurodegenerative diseases where synapses are targeted early on such as Alzheimer’s disease.

To raise money for @alzheimerssoc we will be having a bake sale next Friday 14th of Feb in @MRC_LMCB coffee room! Please RT and come by! #firsttweet #bakesale #alzheimersociety #valentines